Carl Heinrich Breidenstein (1796–1876) was Germany´s first professor of musicology. He had held a post at Bonn University since 1823. In 1828 he had first expressed the idea of a monument to Beethoven in his native town. In 1832 he wrote an article suggesting the idea, or, even better, a living memorial, one dedicated to art and education.

Up to that time it had not been German or Austrian practice to erect statues of great cultural figures. Friedrich Schiller had to wait until 1839; the first one of Mozart (in Salzburg, Austria) was not unveiled until 1842; and the first one of Beethoven in Vienna, the city he spent most time in, was most associated with, and died in, was not created until 1880.[3] 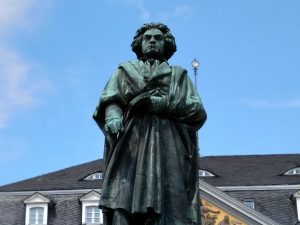 On 17 December 1835, the “Bonn Association for the Beethoven Monument”, headed by the famous translator of Shakespeare, August Wilhelm Schlegel, issued a call for a permanent memorial to Beethoven, which was sent to all the principal musical publications in Germany, France, and England. King Ludwig I of Bavaria was enthusiastic, but the response was otherwise not very promising: in Paris, Luigi Cherubini promised a special fund-raising concert but later changed his mind; in London, Beethoven’s friend Sir George Smart and Ignaz Moscheles gave a benefit concert at the Drury Lane Theatre, including the Ode to Joy from the Ninth Symphony, but it was poorly attended.[4]

Franz Liszt involved himself in the project in October 1839 when it became clear it was in danger of foundering through lack of financial support. Till then, the French contributions had totalled less than 425 francs; Liszt’s own personal donation exceeded 10,000 francs.[3] He contributed his advocacy and also his personal energies in concerts and recitals, the proceeds of which went towards the construction fund. One such concert was his last public appearance with Frédéric Chopin, a pair of piano duo concerts held at the Salle Pleyel and the Conservatoire de Paris on 25 and 26 April 1841.[5]

The sole condition of Liszt’s involvement was that the sculptor of the statue of Beethoven should be the Italian, Lorenzo Bartolini.[3] In the event, the contract was awarded to a German, Ernst Julius Hähnel (1811–1891).[6] The casting was done by Jakob Daniel Burgschmiet of Nuremberg.[1]

Liszt returned to the concert stage for this purpose; he had earlier retired to compose and spend time with his family. He also wrote a special work for occasion of the unveiling, Festival Cantata for the Inauguration of the Beethoven Monument in Bonn, S.67 (Festkantate zur Enthüllung des Beethoven-Denkmals in Bonn).[1][3]

Other musicians had been involved earlier: Robert Schumann offered to write a “Grande Sonate”, have it published with gold trim and black binding, and use the proceeds of the sale for the building fund. His Obolen auf Beethovens Monument: Ruinen, Trophäen, Palmen: grosse Sonate für das Pianoforte für Beethovens Denkmal, von Florestan und Eusebius (Small Contribution to Beethoven’s Monument: Ruins, Trophies, Palms: Grand Sonata for the Pianoforte for Beethoven’s Memorial, by Florestan and Eusebius) underwent some name changes. His publishers did not accept it in 1836, and so he revised it and had it published in 1839 as his Fantasie in C, Op. 17, with a dedication to Liszt. In the first movement, Schumann possibly alludes to a theme from Beethoven&apos;s song cycle An die ferne Geliebte (To the Distant Beloved)[7] which if true, was also an allusion to his own “distant beloved”, Clara Wieck, who was then separated from him in Paris, by order of her father Friedrich Wieck.[8] In 1841 Felix Mendelssohn wrote his Variations sérieuses in D minor for the project.[9]

On 12 May 1845, Schlegel died. His place as head of the organising committee was taken by the instigator of the idea, Heinrich Breidenstein. 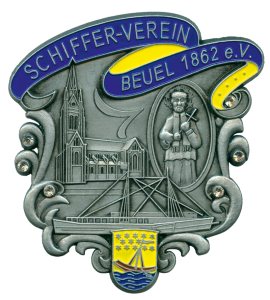